Aisling was our Gift from God

Aisling was our gift from God, and today we, her proud parents, are giving her back and celebrating her truly remarkable spirit for “life-in-the-fast-lane”.

Freedom and independence, dance and music, academic success, were won and methodically worked out despite a lifetime of disruption and tough & inescapable drugs and treatment.

Aisling the name, means, vision or inspirational dream and she certainly lived to inspire us all.  From birth to her last breath; in her car, or tackling the bureaucracy of disability and benefits she occupied the “driving seat” As for life and living -  she ran on “rocket fuel”  and was in a different “gear” to the rest of us!

Aisling had a beautiful singing voice and gave much pleasure to village events, school performances, and to us at home. She was perfectly composed on stage behind a microphone, and her lovely light Irish Dancing was wonderful to watch.  Love of life and laughter, song and dance, and her Irish and British Heritage kept her happy and contented right up to her last few days. As we all know, she never complained and put a positive “spin” on much of her illness.

Aisling had real compassion for others and loved the very young and the very old.  She had an often curious fascination of others, which for her meant seeking the humanity behind any formality….. the unusual in ordinary lives.  This meant she saw the good in people, but was clever enough do her homework should she ever need to negotiate with them! Whether a nurse, teacher, doctor, priest, or anyone with an assumed Role or responsibility, she thrived on any ordinary tit-bit of information that brought out the person within.

As a child her favourite occupation between treatments and unpleasant  procedures was to sit at the staff desk on Ward D2 in Addenbrookes, playing the young receptionist, answering the phone, going on the internet, but most of all…. getting all the gossip behind the given NHS hierarchy ! Having the gossip could prove to be useful currency for the future ! Weddings, pregnancies, births, divorces, holidays - She made it her business to keep up with it all until next hospital admission.

Being a young person with much personal suffering, Aisling had simply no time for pretence, and was intolerant of those who acted their role without being prepared to be human and real with her. She got on better with adults who spoke to her as an adult, and doctors who would speak down to her were often told to go away. Kicking a doctor in the shins when she was three, telling him she didn’t like him, and to go “back out that door” was a very embarrassing moment!

She loved apes, monkeys and orang-utans. Monkey World in Dorset was a favourite place, and people often bought her monkey gifts. Our floral tribute to her today is a favourite monkey face and she would have just loved it!

Aisling was Queen of the Internet. Her iPhone and MacBook were natural extensions of her hands and her mind. She was an avid gamer, online shopper, and in recent years Aisling took great interest in her family tree, doing much research. She ordered her favourite Chinese takeaway food when hospital food didn’t appeal, and took lots of online consumer surveys. When it came to virtual warfare and combat she was up there with the rest of them, her little hands frantically shooting and throwing grenades. In the game she could virtually run, leap, and climb freely.  It was through the internet that she had frequent communications with a certain American soldier serving in Iraq, and this blossomed into a special love story.

In her life, she endured a certain amount of social isolation with the burden of a progressive disease affecting not only her lungs but also her pancreas.  Later drugs and side effects also took their toll on her hearing, muscles, bone density, and sleep patterns. The management of her Cystic Fibrosis was without doubt a full-time job in the last 18 months, with oxygen and insulin dependence. The rapid deterioration for her, us her family, and Chris her fiancé has been simply breath-taking. We not only mourn her loss but the future she could have had together with Chris, and the possibilities and plans she had for their wedding, taking up her education again, travel and fitness.

These plans were only possible with new lungs. She would want us all to have a new commitment to spreading the message about organ transplantation. Most of us are familiar with her wonderful blog, through which many signed for organ donation and became inspired. She commented in mid-December that whilst everyone was madly buying material Christmas gifts for friends and family they ought to be thinking of the best gift they could ever give.  She said, “You cannot take your heart or lungs, kidneys of liver with you when you die – in any case you don’t need them anymore, but you could give another ten years of life to someone else and their family”

Today she has brought us back to school to maybe remind us of old lessons we have forgotten or new ones we have yet to learn! Her positive journey to becoming a woman of courage and inner strength really began at this school. We are here today because in her short life, she said that St. Edmunds was simply the happiest days of her education. She talked about this school and her teachers and repeatedly said she intended to write a thank you letter in recent weeks, but was too weak to do so. She had two messages for staff and students here:

2.    The diverse cultures, faiths, nationalities meant I felt accepted and for the first time I didn’t stick out as “Different”. Everyone here was different!

Aisling’s Christmas gifts to her immediate family were ordered from her hospital bed between sleeping. I am hugely proud that she managed to do this. We opened them with very heavy hearts on Christmas Day. Our hearts were lifted though: She circled the first class stamp on the jiffy bag, and wrote “Frist Class Parents , Ha! Ha!” and on the tag she wrote” Thank you for being such good parents and friends. Always there for me.” The fact she thought of Denis and I as friends was the most precious thing she could have said and the gift tag was in itself a simple loving goodbye. May she live in our hearts, forever young and beautiful, and may her voice extend way beyond the boundaries of worldly time. 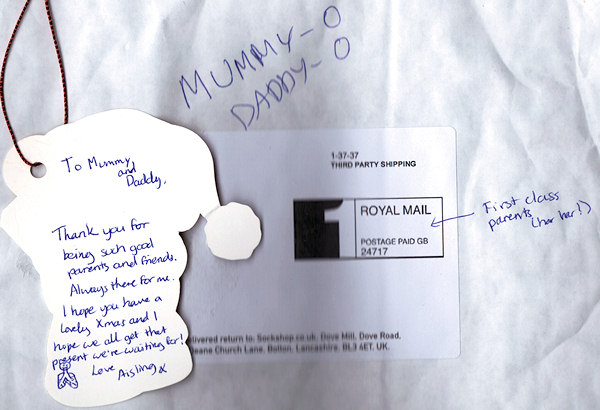 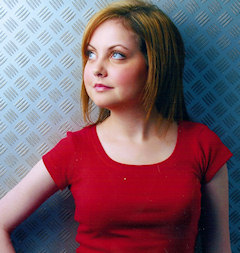